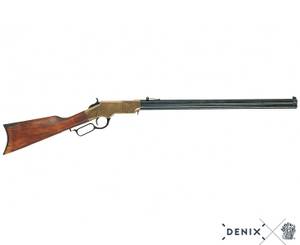 The original Henry rifle was a .44 caliber rimfire, lever-action, breech-loading rifle designed by Benjamin Tyler Henry in the late 1850s. The Henry rifle was an improved version of the earlier Volcanic Repeating rifle. The Henry rifle used copper (later brass) rimfire cartridges containing 25 grains (1.6 g) of gunpowder to a 216 grain (14 g) bullet. 900 Henry rifles were manufactured between summer and October 1862; by 1864, production had peaked at 290 per month. By the time production ended in 1866, approximately 14,000 units had been manufactured.

Civil War 1860 Henry RifleFor a Civil War soldier, owning a Henry rifle was a point of pride. Although it was never officially adopted for service by the Union Army, many soldiers purchased Henry rifles with their own funds. The brass framed rifles could fire at a rate of 28 rounds per minute when used correctly, so soldiers who saved their pay to buy one often believed that the rifle would help them survive. They were frequently used by scouts, skirmishers, flank guards, and raiding parties, rather than in regular infantry formations. To the amazed muzzleloader-armed Confederates who had to face this deadly "sixteen shooter," it was "that damned Yankee rifle that they load on Sunday and shoot all week!" Very few captured Henry rifles were used on a limited basis by Confederate troops. Since those few Confederate troops who came into possession of one of these rifles had little way to resupply the special ammunition used by this gun, its widespread use by Confederate forces was very impractical. The rifle was however, known to have been used at least in part by some fifteen different Confederate units. These units included cavalry units in Louisiana, Texas, and Virginia, as well as the personal bodyguards of Confederate President Jefferson Davis.