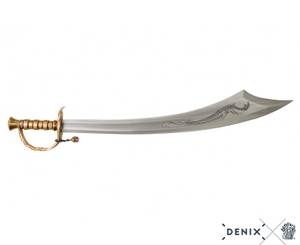 Between the sixteenth and nineteenth centuries, pirates desolated the maritime traffic and metropolitan ports of America, and in the early eighteenth century set their bases on the island of New Providence in the Bahamas. Among these Caribbean pirates were fearsome captains such as was the famous Blackbeard, who aboard the "Queen Anne's Revenge" expelled the Caribbean and the Atlantic coast of North America.

He began his criminal activities under the command of Benjamin Hornigold after the War of Spanish Secession (1700-1713). Teach impressed by his high stature and his most notorious physical feature, a long, thick black beard, which made him look really intimidating and imposing. He was always armed with several swords, knives, and three sets of pistols; He smoothed his beard with wicks of cannon that he lit when he went into battle: those who saw him fight, with a cloud of smoke around his head, said that he looked like the devil.

In May of 1718 blocked the port of Charleston, surrounded the city and kidnapped to several citizens, by whose freedom he requested an unusual rescue: a box of medicines. His fleet was reached and defeated; Teach received five bullets and several saber-wounds, was beheaded and his head hung in the yard of the Hampton garrison.

Relive with the historical reproduction of this sword DENIX of Blackbeard pirate adventures in the Caribbean seas.